Astronomy Picture of the Day: A Laser Strike at the Galactic Center 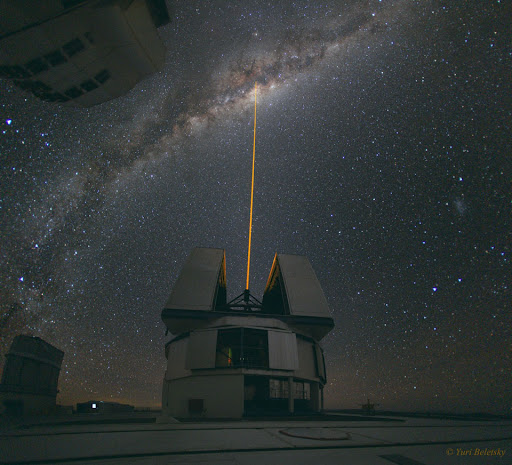 A Laser Strike at the Galactic Center Why are these people shooting a powerful laser into the center of our Galaxy? Fortunately, this is not meant to be the first step in a Galactic war . Rather, astronomers at the Very Large Telescope (VLT) site in Chile are trying to measure the distortions of Earth's ever changing atmosphere . Constant imaging of high-altitude atoms excited by the laser -- which appear like an artificial star -- allow astronomers to instantly measure atmospheric blurring . This information is fed back to a VLT telescope mirror which is then slightly deformed to minimize this blurring. In this case , a VLT was observing our Galaxy's center , and so Earth's atmospheric blurring in that direction was needed. As for inter-galaxy warfare, when viewed from our Galaxy's center , no casualties are expected. In fact, the light from this powerful laser
Post a Comment
Read more

Today's Deal: Save 75% on Planetary Annihilation: TITANS !* Look for the deals each day on the front page of Steam. Or follow us on twitter or Facebook for instant notifications wherever you are! *Offer ends Monday at 10AM Pacific Time via Steam RSS News Feed "http://bit.ly/2Ttbmg0"
Post a Comment
Read more

Default ringtones are boring. Here’s how to make your own notifications.

DIY Create your own audio. Your phone chirps all the time. Why not customize those noises? Here's how to create your own smartphone ringtones and notifications. via Popular Science "http://bit.ly/2FadhD3"
Post a Comment
Read more
More posts